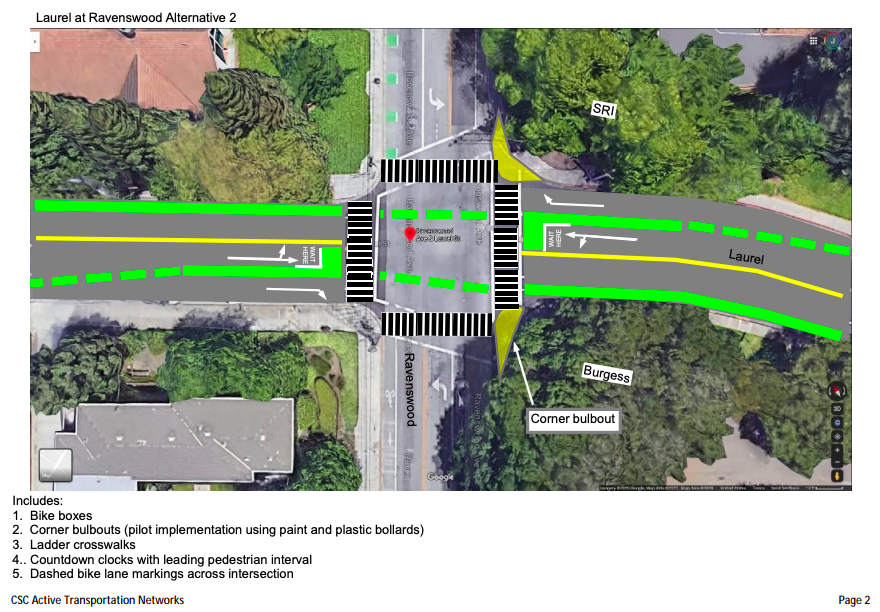 On Wednesday February 12, the Menlo Park Complete Streets Commission reviewed a proposed redesign of the Laurel/Ravenswood intersection. a project that was created as an “environmental mitigation” for the 1300 El Camino project.

The proposed project would change the lane configuration so there is a dedicated left turn lane from Laurel to Ravenswood.   The proposal also extended the bike lanes through what is currently a gap.  However, the proposal created greater conflicts between people bicycling and people driving,

This is a route that connects to schools, the Burgess pool, gym and civic complex and library with many children using these facilities.

The turn lane change was required under the now-obsolete “level of service” (LOS) EIR standards, drivers were expected to be delayed an additional 6 seconds.  (That’s not a typo, 6 seconds of car delay required the intersection to be changed to add a turn lane under the old rules.).

At the meeting, community members Ken Kershner and Jen Wolosin spoke against the harmful use of the obsolete LOS standard to speed cars and reduce pedestrian and cyclist safety.

The “Active Transportation Subcommittee” of the Complete Streets Commission noticed an “Alternative 2” in the staff report (see below) that would reduce conflicts between cyclists and drivers.  In addition, the subcommittee proposed bulbouts to reduce pedestrian crossing distance and slow the speed of turning drivers for better visibility of pedestrians.  See the illustration that the “active transportation subcommittee” used to visualize the “alternative 2” which was not illustrated in the staff report.

The Complete Streets Commission voted to recommend Alternative 2 to City Council, which would retain the 6 seconds of driver delay, but reduce pedestrian crossing time by at least 6 seconds and reduce conflicts between cyclists and drivers.

As of July, the old “level of service” car delay standard will no longer be legally required under the California Environmental Quality Act, and the city may have a legal opening to reconsider how it wants to reduce the transportation impact of the 1300 El Camino building.

Staff noted at the meeting that the collision rate at the intersection was “relatively low” with “only” 12 collisions in a 3 year period. However, the city has a Vision Zero policy supporting a goal of zero fatalities and serious injuries. Recently, two Scandinavian cities announced that they had no pedestrian or cyclist deaths in the previous year. This was achieved through step-by-step reducing driving speed.

The Laurel/Ravenswood project will come to Council in the next few months. We’ll keep you posted on opportunities to share your thoughts about the relative importance of improving safety, or saving six seconds for drivers on neighborhood streets.

Here is the link to the staff report, with a short description of the alternatives presented to the commissioners.
https://www.menlopark.org/DocumentCenter/View/24252/SR—Laurel-Street-Final-Intersection-Layout